You know when a story starts like:” …a friend of a friend of mine, who is actually the cousin of that lady you once met, that was the sister of…” it can’t be good!

A friend of mine insisted that his friend – apparently a chef from the truffle area of Alba – shared with him the deepest secret on how to make the best tagliatelle with truffle….and I believed him.

I prepared my tagliatelle how I was told, but I regret I wasted my last precious truffle on it.

The recipe was good; I’m not saying it wasn’t but sometimes a good pasta all’olio is better than when things get complicate, even if it is supposed to be THE official recipe.

I’ll share the recipe with you and you might love it – for me it was just a bit heavy and the egg took away the delicate and not very strong black truffle taste a bit – shame!

The only five things you have to do are: boil the water to cook your pasta; melt the butter and mix it with the yolk; use this mix to sauce your pasta; slice your truffle on it; eat.

What I did was use the boiling water of the pasta to melt the butter at bain-marie and I added the egg immediately after.

Remember to remove the container from the hot water very fast; if not, your egg will kind of cook – awful! I had to do it twice cos the first time I had a kind of terrible mini empanada!!! 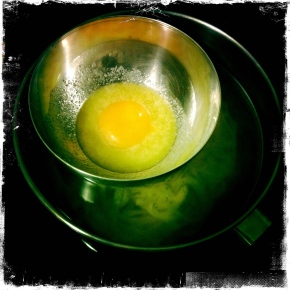 The butter and the yolk should create a very creamy sauce that after you can use on your pasta.

Slice your precious truffle very thin on your pasta!